Jump ahead to the newest entries in the Farm Journal

I'm a little behind in planning for the coming year, but have no fear we'll be growing something soon. And before you know it we'll be lugging it up and down the hill each day as the daily roadside stand routine begins again. As.the manure pile grows and the ground soaks up some much needed rain and snow melt the farmers prepare for another year Down on the Farm....

Cindy planted the hotbed today with tomatoes, eggplants and peppers. We are targeting or production this year for an early July start with our main crops. This year we are not planning on producing the early crops like peas, brocolli etc. We will likely have a few strawberries, but not many. This will be the first year of real production for our asparagus crop.

Activity will be picking up on the farm soon as we begin spreading the mountains of manure and preparing the ground for another season. The weather has been on the chilly and breezy side and this delayed our planting the hotbed and has put a damper on fishing, but hang in there. I hear Spring is on the way!

There is quiet but steady activity on the farm. The hotbed now has tomatoes up, so the daily routine of managing the light and temp in the hotbed is a top priority. Cindy and her dad have also been spreading the manure on the fields. The occasional warm days have really got the rye growing, particularly in the Smith field. We will soon be tilling some ground there for potatoes.

I did some plowing yesterday in the Smith field hoping to cover some of the fast growing rye and get some ground ready for potatoes and a family pea patch. That was the first time I've  plowed in a while since I have routinely used the rototiller for the past 5 years or so in primary tillage. That was the first time I've used the 4WD tractor with a plow. Felt like the tractor was pulling the plow instead of the other way around as is sometimes the case with the underpowered 2WD's I used when we first started farming. But boy was it a workout! 4WD with no power steering.

We will start cutting asparagus this week. See Cindy if you want some. Everything in the hotbed looks great. We will start transplanting tomatoes from the hotbed to 32 cell flats some time this week. Many manure piles still waiting to be spread.

Today was the annual Easter Egg Hunt on the farm (see the happy egghunters above!). We had about 70 guests and hid over 70 dozen eggs. I think everyone went home happy. I particularly enjoyed this year since I managed to get out of hiding the eggs.

Farm activities have continued in spite of my lack of reporting here. We planted the potatoes. Tomatoes, eggplants and peppers are growing well in the greenhouse as well as many other crops soon to be set out. I plowed the entire farm this past week because of the tall rye cover. Hopefully this will pay off in not dealing with the rye as a weed later. It has been a while since I've done any plowing and I actually enjoyed it for the first hour or so. Two days later I've had enough.

We hope to have strawberries available soon. These will be our only crop until the main crops come in toward the end of June. This is a change from previous years and is an intentional scaling back of the operation to make it more managable. Hang in there summer is on the way.

May was quite a dry month till a couple of days ago. We got our tomatoes set out and quickly put some irrigation down to keep them alive. We've got string beans and brocolli irrigated also. Now that we've gotten some rain we're quickly settting out the rest of our first planting. Today we set out eggplant and some squash.

We have strawberries for sale now at the the produce stand. Once the strawberries fade there will be a lull in production this year till the main crops come in at the end of June or the beginning of July. Still lots to do... We'll see you down on the farm!

Things are very dry on the farm. We would already be out of business were it not for drip irrigation this year. Everything is looking pretty good. Cindy and crew are keeping up with the weeds and the farm looks ship-shape. There are some later plantings which should be going in the ground including our second tomatoes, squash, and cukes as well as the fall stuff like winter squash and pumpkins. With things being so dry there has been no way to get the ground ready for any of these crops. Time will tell...

We got some rain last week. Well over an inch. This has helped the crops. We are still planting a few things. Yesterday I seeded a third planting of beans, a second planting of squash and some more cukes. Cindy and crew have done an excellent job of keeping ahead of the weeds with hoeing and cultivating, so the farm looks trim and fit. Take a look at the back field: 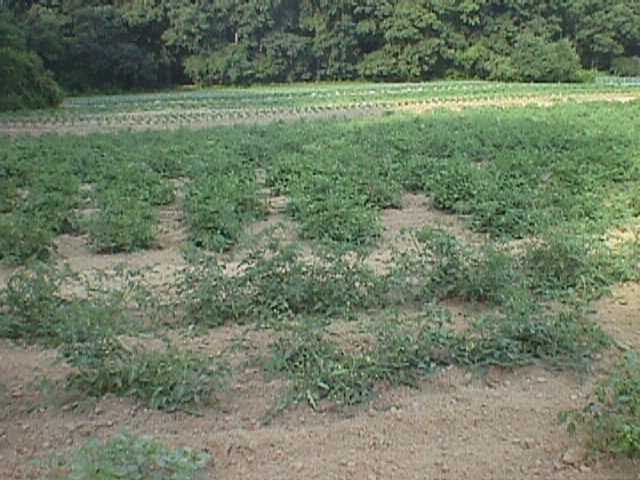 The produce stand is now open daily. Hours are M-F Noon-7PM and Sat./Sun. 10AM-6PM. Right now we are selling summer squash, fresh dug new potatoes, and honey. Shouldn't be long and we'll be in full swing. Stop by! We'll see you donw on the farm!

That planting I put in last week was harrowed a couple of days ago and everything has popped up. Looking good! Steamy temps are predicted for the holiday weekend so we're expecting things to really take off. I picked a couple of tomatoes today! We still have one more planting of tomatoes to set out next week. The farm really looks good. Everything is lush and green and not many weeds. Way to go Cindy! Pick, pick pick...... We'll see you down of the farm.

The drought took it toll on farm production. We got none of our fall stuff in the ground other than a small planting of winter squash, cukes and a late planting of tomatoes. Overall though, we didn't do too bad. Most of the stuff around the house is irrigated and so survived and even thrived. The cut-your-own flower patch is gorgeous. The weeds did pretty well too!

The kids go back to school next week. It is hard to believe the summer is coming to a close. We'll be hanging in there till the end of October so please stop by. We'll see you down on the farm!

The drought caught up with us this month. Combine the mid-summer drought with the results of Hurricane Dennis and Hurricane Floyd and you get a really messed up production cycle. Looks like we won't have enough of our own stuff to justify staying open any longer. This season has come to an abrupt halt. See you in the new Millenium!