Pickerel fishing tips for Chain Pickerel in tidewater in the Chesapeake Bay Region.

My favorite fishing is pickerel fishing in the tidal rivers like the Magothy River. This fishing is best in the 'off season' of October thru March and I think that is one of the reasons I like it so much -- you're not fighting the crowds. Chain Pickerel are fun to catch, sometimes finicky especially in the tidewater, and often available in numbers when conditions are prime. The following tips are somewhat random in organization and I'm to blame for any errors or misinformation. 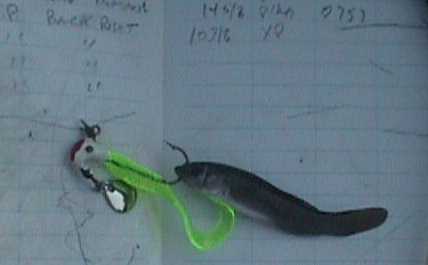 Often the pickerel are in very shallow 1-3 ft of water. Usually we just lay off the shoreline just far enough to cast right up against the shoreline and retrieve out. Wood cover has been best lately, but we've caught some big ones under floating leaves on a big shallow flat. Sometimes it pays to fish drops just off the shore were the bottom drops from 1-3 ft to 4-6 ft especially as it gets colder. Trolling the 5 ft. contour (slow, on electric motor) usually puts you right of the ends of the piers and that can be effective sometimes. Minnow on a small shad dart or horse-head jig with twister tail is what we use, though sometimes we end up taking off the twister tails since on average the fish are small this year and the plain head with a minnow attached worked pretty good. Of course all this only works when their in a bitin' mood. 8-) A nice moving tide is preferred. Falling tides are prime. Low tides suck.

In general I use a steady moderate speed retrieve. I don't think you could reel fast enough with most small spin outfits to keep it away from a pickerel if he really wanted it.

Look for clean clear water. They are mostly sight feeders. No need to drag it right along the bottom as a pickerel will come up to a bait more likely than go down to one. Want perch too, get down on the bottom.

As it gets colder they'll be a little less aggressive and you may have to slow it down a bit. 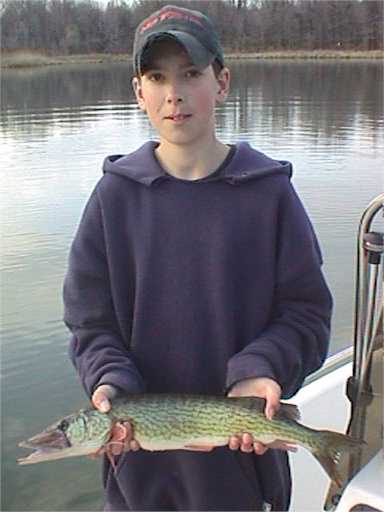 A local guide recommends occasionally moving right in to shore and casting parallel to shore. This is a good trick to remember especially if their holding tight to the shoreline. You're lure will spend more time in the 'hot zone.'

Sometimes a bobber can be effective. If it's kind of windy sometimes I'll drift a jig under a bobber with the wind.

If you get bit fish the same spot a little longer as it's not unusual to catch several from the same spot. In any case, key in on the type of cover that they seem to be on ie. wood bulkheads, old pilings, tree stumps, floating leaves, points, edges, weeds, etc. and try to fish the same type areas as you go along.

Remember where you get bit and try those areas again another day or time. We've tagged pickerel and caught them again in near the same exact spot more times than I can count.

I prefer real minnows. Most times the pickerel do to. If you go with just plastics keep it under 3 inches unless you know you've got some big ones in the area.

My buddy Virgil Poe is the best pickerel fisherman I know. Here's some advise he has passed along to me:

Right now(2004) the Magothy is recovering from a fish kill a couple of years back. Currently, the Magothy is very healthy in numbers of smaller pickerels. There are a few large fish around that survived and we have them to thank for the numbers of fish we are now enjoying.

The entire river normally holds pickerels, but a couple of visits to Redhouse last fall resulted in little success locating any numbers. So Rick and I have been concentrating our efforts more up river, but years past that area has held it's fair share of the fish. We are overdue for a return trip there.

The pickerel do well in the brackish waters of the bay and can be found in most all of them. More so in the rivers, and points north.

The pickerels are of the pike family and I believe there are a few versions of em. The one we have here in the bay area that I know of is the Chain Pickerel. They mostly eat minnows and fish. They'll hit just about anything ya throw at em though, and I've caught many of em while worming for bass.

I seldom use treble hooks anymore, but yes, they'll hit just about any bass plug ya throw. Please don't use the trebs on these fish though. It really tears em up, and ya just don't need em. The best all around bait on a tidal river would be a small dart or jig head, with a curly tail grub of just about any color. Small Roadrunner type baits with a small blade works well too. Most of what I throw is under a quarter ounce. Some days it pays to tip yer bait with a lip hooked minnow of maybe up to a couple of inches long. There's been days that I've kept up with Rick with him using a minnow and me just the jig. Then there's been days I've had to dip into the minnow bucket to keep up. This isn't a contest, but the only way ya can compare in regards to the learning curve, and I doubt that any of us ever gets the last piece of the puzzle in place. A couple of years back I did pretty good using bass assassins, but they may be a little to large right now for a hookup with the smaller fish.

Keep the tackle light and these spunky guys will entertain ya for hours. I never go over 6lb test line, and an 8 to 12 pound leader should serve ya well. Especially tying to the smaller baits. Originally I'll start with a leader of 2 or more ft long and as it frays I just snip it off a couple of inches and retie.

Pickerels stalk and ambush their pray. Find the grass and ya should have found some fish. Wood is good too. I've laid on a pier and watched them, and have observed em from a boat. They'll set up next to a pilling facing away from it. They seem to try to blend in and will sit there motionless, waiting for an opportunity. Bulkheads, brush, downed limbs, rocks, anything that harbors minnows is worth a cast. They also relate to the edge of a channel or drop off. I used to troll for em on electric quite a bit a few years back. In clear (tap) water, I've trolled em up in waters 10ft deep with my baits (dart and minnow) running at 5ft. Had days that the action was so busy I could only work one rod. Tide and water level applies to the pickerels. Low water being yer worst, more is better. Moving is good too.

Ya catch one, cast back in to the same spot. We've bailed double digits from an area about the size of a small bathroom.

Clear water is best. The cleaner the better. These fish can be spooky, so keep well back when fishing shallow and make longer casts. I've caught a couple while working a bulkhead and let myself be pushed in by wind, only to have the action stop. Backed back off and continued catching. Another reason I like the lighter line, other than it being a little more sporting, ya can throw the smaller baits a little further using it. Dirty or stained water, maybe throw something with a blade (roadrunner) type or small spinner bait. The lateral line of the pikes is very well developed, more so than some other fishes. A blind pike can catch food. It's been proven in a test tank. A noisy bait helps in stained waters, but ya just can't beat the cleaner stuff.

Anyone that likes fishin should love the pickerels. Fall and spring are the best times in these parts. I fish em through the winter but the numbers go down. The perch are a plus, another reason to keep the baits on the smaller size. Ya have rockfish in the river too throughout the year. Occasionally I'll break away and fish on em. Ya wont run the numbers up like the guys fishing the warm water outlets, but when ya find em you've done so on his turf, and that can be an accomplishment in itself.